The Winstep Nexus dock is a FREE dock for Windows. Every feature you’d expect from a dock, including widgets, mouse-over effects, skins, drag-and-drop, and many others not available in most other docks, such as live icon reflections, in-dock system tray, blur-behind effects, and much more. Completely customizable, with thousands of different backgrounds freely available online, Nexus is fully compatible with skins for all 3rd party docks.

v16.6 is a must-have release, bringing some major improvements to the handling of Universal Windows Apps under Windows 10 and a new fast boot option that will make Winstep applications load so much faster after a reboot that your jaw will - literally - drop!

UWP/Universal apps are alien to Windows. They are so different that Winstep applications previously showed a 'generic' box app icon for any running UWP apps. 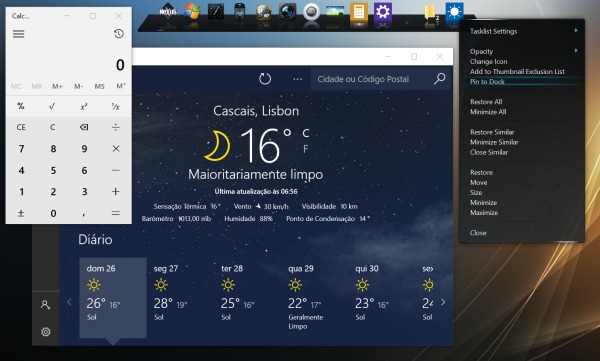 With v16.6, running UWP apps now show the proper icon, can be pinned to the dock, are properly grouped together, can display a customized icon, and will even show a running indicator when pinned to the dock if the App is running.

In other words, UWP apps are now handled like any other Win32 applications, which makes Nexus the first (and so far the only) dock able to pull this off.


Enable Fast Boot and Nexus will be there already waiting for you as soon as you see the Windows Desktop. Yes, the difference is that dramatic.

Nexus is a program launcher and a Windows user interface add-on. As such, it should be available to you at the same time as the Windows Desktop.

Unfortunately every version of Windows since Vista has been making 3rd party applications take long and longer to start, and Winstep applications were no exception. This is because the OS is cheating to make itself look better: Microsoft makes Windows deliberately delay the loading of 3rd party applications for the Desktop to be displayed faster - thus giving the ilusion that Windows is booting faster too. And no, we are not making this up. 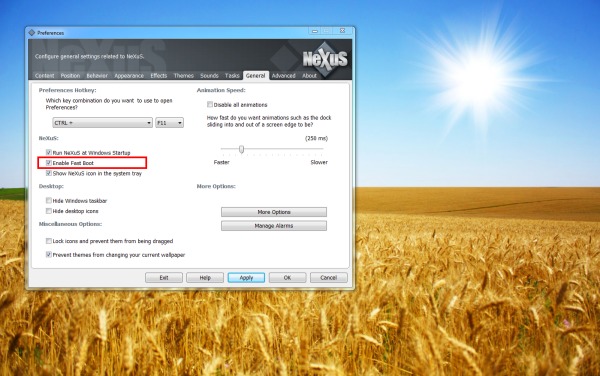 Why isn't Fast Boot enabled by default? For two reasons:

First, some security applications such as WinPatrol might prompt the user when this option is enabled. This is because the method used to make the Winstep application start faster is sometimes also used by malware to run at Windows startup.

Second, although it has no side-effects, we are using a method which was not designed for this purpose. If every application did the same (and some have a truly misplaced sense of self-importance) we would soon be back to square one.

We therefore feel that this is the type of decision that should be left to the user. The user (NOT the application and NOT Microsoft for them) decides what he wants to boot faster.

We're happy to announce this is no longer the case: 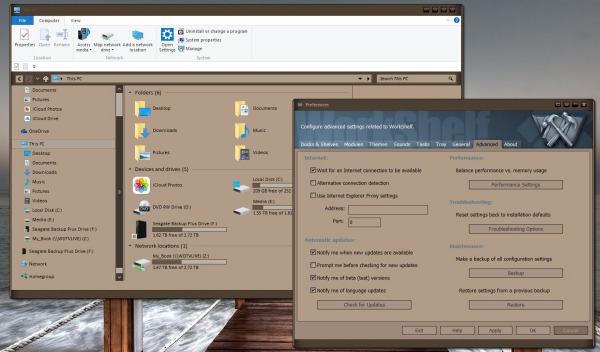 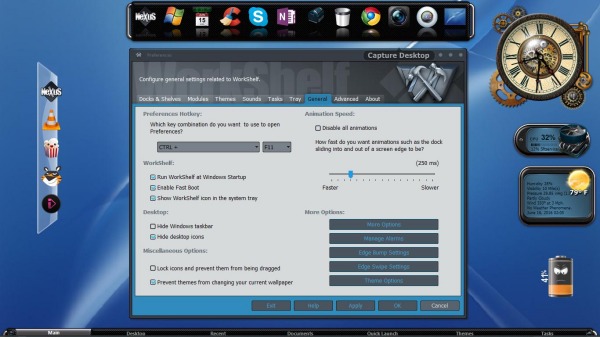 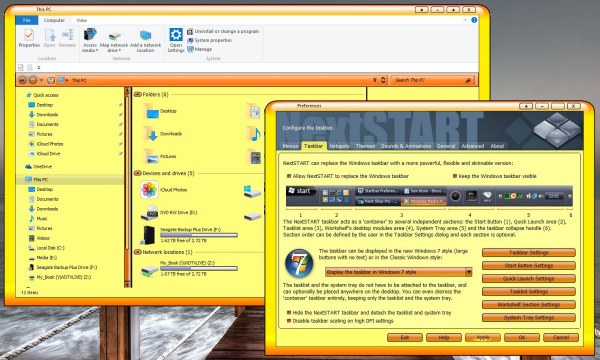 Yes, this last WindowBlinds theme hurts our eyes too, but it proves a point.


In the previous release we got the wallpaper hot-track colorization feature working with the Windows 7 wallpaper slide-show. But we goofed up, sort of. Only after the release did we become aware via user feedback that the feature was still having trouble on some Windows 10 systems. All fixed now. 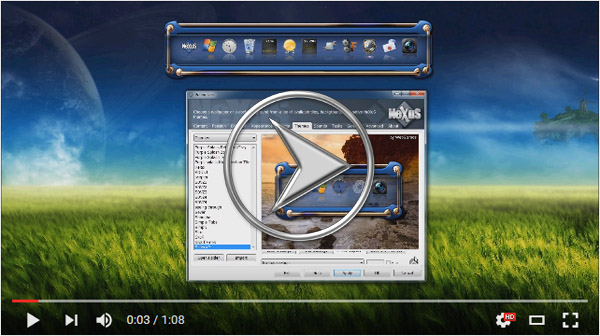 With ever increasing screen resolutions and the arrival of 4K monitors, high-DPI systems are becoming a lot more common. Version 15.9 added high-DPI support to Winstep applications and since then we have been constantly improving on it to try to make it as perfect as possible.

Among the many User Interface tweaks in this release, which you may or may not notice, is the use of Segoe UI instead of Tahoma when the screen DPI is higher than 100%. Although we feel Tahoma is a still a better choice than Segoe UI when running at 100% DPI, it becomes a bit too bulky (almost as if Bold was enabled) at higher DPIs. 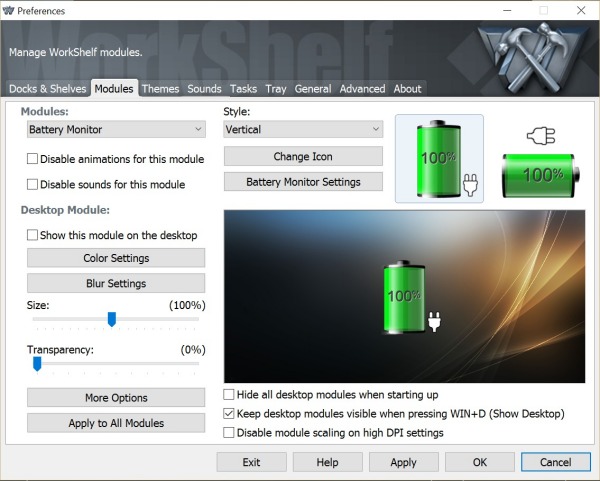 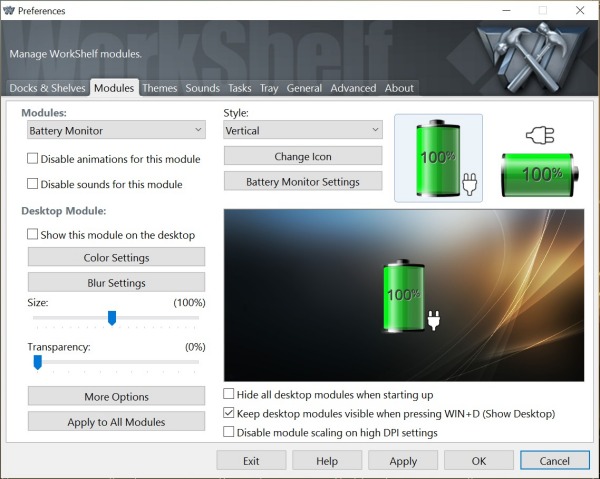 This is not something you will notice now, but you definitely will on the next update as it will reduce the size of future updates by at least half.

Winstep is celebrating 20 years in business with a fantastic, time-limited, price reduction all across the board! Enjoy it while it lasts!

v19.2 is mainly a maintenance release with a few goodies thrown in such as a matching Windows 10 Light Mode and much more!

v19.2 is mostly a maintenance release with a few goodies thrown in such as a matching Windows 10 Light Mode and much more!

Just in time for Christmas, v18.12 is a massive release featuring the new Grid Stacks, Search Filters, multi monitor profiles and much more!

Just in time for Christmas, v18.12 is a massive release featuring the new Grid Stacks and Search Filters (Nexus Ultimate), multi monitor profiles and much more!

Cyber Monday 2018 is here and Winstep Xtreme is 50% off for the next 24 hours. So, will you take the final chance to bag a deal?

After nearly 20 years providing the best products at competitive prices, Winstep is increasing the prices of all its applications for the first time - just to make up (barely) for inflation.

Major release featuring the new Drawers, support for multiple and vertical Shelves and much more!

Winstep and the EU GDPR

The General Data Protection Regulation (GDPR) is a legal framework that sets guidelines for the collection and processing of personal information of individuals within the European Union (EU).

High-quality voice packs in multiple languages, Email Checker module now displays number of unread messages on the icon itself, and much more!

v16.9 is is mostly a maintenance release, fixing some issues in the previous version and restoring the NOOA/METAR Weather feed.

v16.9 is is mostly a maintenance release, fixing some issues in the previous version and restoring the NOOA/METAR Weather feed..

New Fast Boot option, running Universal Windows Apps in Windows 10 now display the proper icon and can be pinned to docks and the taskbar, and much more!

New Fast Boot option, running Universal Windows Apps in Windows 10 now display the proper icon and can be pinned to the dock, and much more!

Minimize windows to the dock, new internal commands, performance improvements and much more in this release!

Winstep Xtreme is now 100% compatible with Windows 10 and much more in this new release!

Nexus is now 100% compatible with Windows 10 and much more in this new release!

With Windows 10 just around the corner, many users have been wondering if Winstep applications (Nexus, Nexus Ultimate and Winstep Xtreme) will work correctly with it.

Take back what is yours!

In an effort to force you into using Metro, Microsoft stripped the familiar Start Menu out of Windows 8. In the process it also stripped your ability to chose for yourself what is best for you.

Weather module not working? Find out why and what is being done about it.

Brought to you by the Winstep design team - more in-house themes currently in the pipeline.

Dock mouseover effects can now be combined with magnify effect, support for animated icons, and much more!

Nexus featured on the front page of Cnet's Download.com!

Version 1.4 fixes an issue in which the Pro version of the program could stop when expanding the Administrative Tools group and adds support for 23 languages.

Winstep Xtreme has been featured on the front page of Cnet's Download.com, not once, but twice!

Roughly 1 year in the making, the official upgrade to Winstep Xtreme v9.5 is finally here!

Welcome to our new web site!

The Winstep web site gets a brand new face to match the quality of our products.